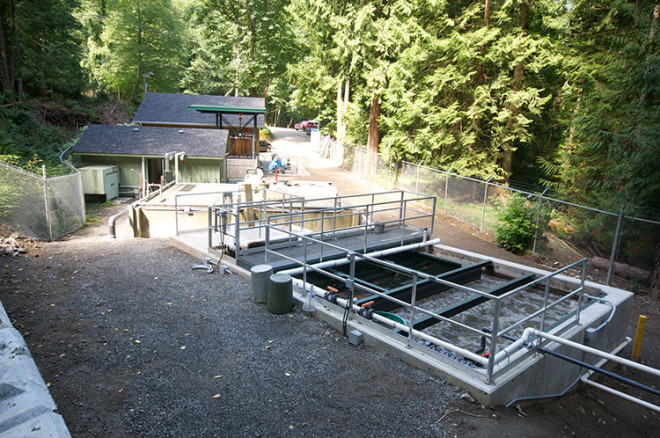 ECOfluid built Bowen Island Municipality’s Snug Cove wastewater treatment plant in 1999, to service local residents and commercial interests. The plant configuration was very basic, consisting of a pump station and two USBF® bioreactors. The plant has been operated by ECOfluid under contract with the Municipality since start-up.

In the summer of 2005, high tourist traffic into Snug Cove started pushing the plant to its biological loading limit. In 2009, after securing Provincial and Federal Grants, the Municipality embarked on a plant expansion and upgrade. The objectives of the approximately $2.3 million project included installation of new mechanical headworks, doubling the plant capacity, upgrading treatment capabilities for effluent reuse, mechanical sludge dewatering, pressurizing the outfall, and adding a septage receiving pilot facility. In August 2010, ECOfluid was awarded a Design-Build contract and the project was substantially completed in June 2011.

The new facility has met all of the objectives of the contract, the most important of which being the immediate increase of the hydraulic and biological capacity of the plant and the improved quality of effluent discharged to the environment. Ultrafiltration membranes and UV and chlorine disinfection were incorporated into the process to meet the reuse objective.